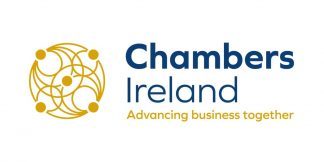 Chambers Ireland has today (3 May 2018) welcomed the launch of the Flood Risk Management Plans accessible via the new website www.floodinfo.ie, from the Office of Public Works.

“Today’s launch of the Flood Risk Management Plans marks a concerted effort by Government to commit to a holistic, nationwide approach to flood defences and to develop greater infrastructure to prepare for more frequent occurrences of adverse and disruptive weather conditions.

Several of our members have been particularly affected in recent times by the increasingly unpredictable weather patterns, which has resulted in considerable cost to local businesses in their region.

While some progress has already been made in a number of towns, clarity around the time frame of implementation of the plans announced today is essential for members throughout our Network, particularly for the Chambers situated in the heavily flood-afflicted areas of Ireland. More detail is required to provide an assurance and relief to homeowners and local businesses nationwide.”