After testing the market in the South East in recent months Slaney Farms  is launching their new Premium gin, Jackford Irish Potato Gin nationwide. The gin is the end result of a idea had three years ago, John Stafford explains.

‘About three years ago, we decided to look at an alternative use for the potatoes we grown here,’ he said. ‘Initially we looked at making crisps, but having carried out quite a bit of market research we decided upon making gin here. We spent a couple of years researching it and developing the product with expert tasters and now we’re delighted to take Jackford Potato Gin to the market and so far the reception has been absolutely brilliant.’

Orla Stafford, Head of Marketing explains what makes it different from other gins on the market. ‘It’s a premium gin and it’s unique really,’ she said. ‘Most gins are made with grain. I think ours is the only one in Ireland made from potatoes, which gives it a much smoother taste. The emphasis is on flavour and it contains an array of over 13 classic and native Irish botanicals and it’s a true gin lover’s delight!’ 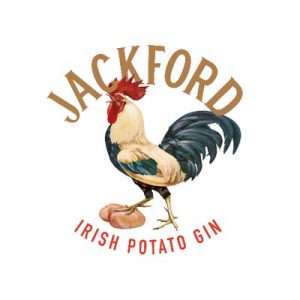 This is just the beginning for Jackford Irish Potato Gin, with plans to buy the 1798 centre building and  putting in a state of the art distillery along with a interactive visitors centre. the plan is to have it open by next summer.

‘The idea is that building will stay almost the same,’ John explained. ‘We’ll fit the old building out with the distillery and then keep the visitors centre where people will be able to come and see how the gin is made and sample the product. It’ll be a fully interactive experience and tour and we’re hoping that we can attract quite a number of tourists to Enniscorthy. If everything goes to plan, we’d hope to move in next year and be open for next summer.’

The operation will most certainly carry an employment boost for the area as well, with John outlining that initially he would foresee the operation providing work for four to five people, with plans to create up to 20 jobs with the visitor centre eventually.