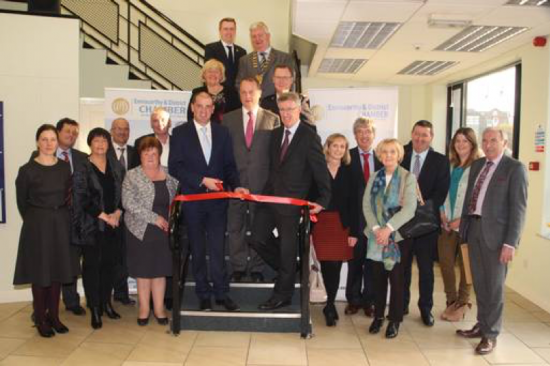 The new visible offices for the Enniscorthy and District Chamber of Commerce in Portsmouth House, Templeshannon have been officially opened by Minister Paul Kehoe.

The building was made possible by the 1994 Urban Renewal Scheme, which was taken up by Enniscorthy entrepreneurs. Owner Michael Bennett, Bennett Tarmacadam Ltd, made the property available to Enniscorthy Chamber, who has been consistent with his repeated generosity to the Chamber and his commitment to every project that arises.

Mr O’Leary said: ‘I want to mention in particular Mr Tom Enright CE and Mr John Carley, Director of Services, who encouraged the Chamber’s plan to recruit a Chief Executive Officer to enable us to market our town and district. I want to thank them for their commitment and the financial assistance they offered for the project in recruiting and funding a new CEO.’

The new CEO Ms Catriona Murphy, a marketing and digital expert, has been a great advantage to the chamber since starting and has hit the ground running by: trebling membership; meeting the members; recruiting four new corporate partners; helped start the Old Dublin Road project; organised the Happy Pear event; organised festivals and promoted Enniscorthy for conferences like NZEB.

Mr O’Leary reported at the official opening that Enniscorthy is doing good at the moment but adjustments needed to made once the by-pass opened.

Mr O’Leary said: ‘Tourism, hotels, restaurants and shops are thriving. Festivals are growing. Clearstream has over 400 employees. Service sectors, accountant firms, financial services and legal services are flourishing and the very first 400 mps broadband has arrived in the South East.

‘The main suggestions needed to be done to make a marked improvement to Enniscorthy were to invite retailers into the town and to improve the public realm and make them become aware of the town as a pleasant place to relax, do business and have an enjoyable experience.’

Mr O’Leary said their next step was to form the Town Team and to make the County prosper again.